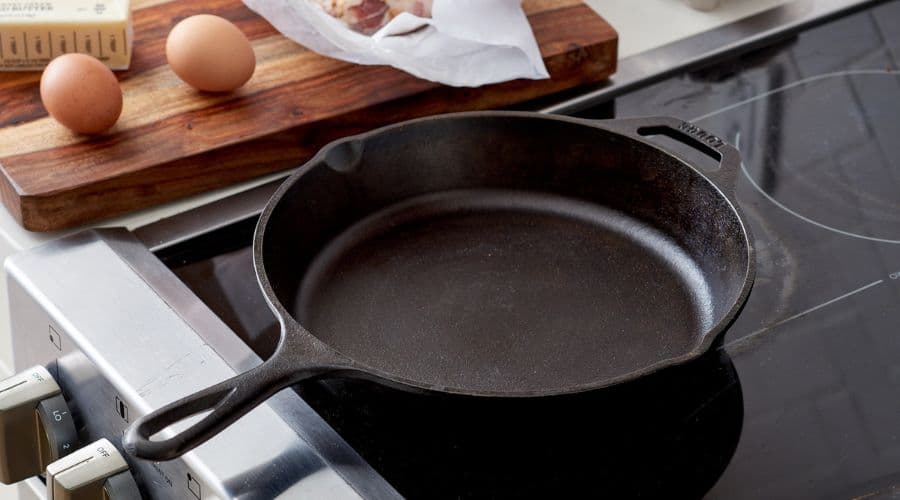 However, there are some factors to consider when using cast iron on an induction cooktop.

And in this article, I’ll go through everything you need to know about cast iron cooking on induction cooktops.

An Induction cooktop contains most advanced cooking technology. More and more people are becoming aware of it, which has resulted in increasing numbers of individuals allowing it into their homes and hearts. The end result is delicious food that’s been prepared precisely in a short amount of time.

When cookware is placed on top of the cooktop, a magnetic field passes through the metal of the frying pan, generating electric current. The resistive electric current heats the cookware and warms food.

Advantages And Disadvantages Of Induction Cooktops

Sometimes when you cook on an induction cooktop, it cooks food faster. Induction burners look nice in a home and can be a topic of conversation at dinner parties.

Induction cooktops don’t make a mess as regular cooking does. The glass top doesn’t get hot so spilt food doesn’t stick. You can wipe it down easily to keep it clean.

Sometimes the cookware on the stove can make a loud rattling noise when they’re turned up to a high setting. This noise depends on what kind of pots and pans you’re using. Lighter stainless steel pots and pans will make more noise than thicker cast iron pots and pans.

Another downside is that you will need thicker & high-quality cookware. If you don’t have the right kind, the cooktop will make noise when hitting high settings.

What is Cast Iron?

Cast iron is a type of metal that is hard and brittle. It is made of carbon and iron, and it can be easily moulded into different shapes. It is tougher than steel, meaning that it can withstand more wear and tear.

Cast Iron is a great material for your kitchen. It keeps the heat in well and also helps to cook food faster. When using an induction stove, you can count on your Cast iron to work every time.

Don’t slide your cast iron: When you’re ready to cook, place your pan down on the surface of the induction cooktop. Do this in one smooth movement if possible. Once it’s set, don’t move it on the induction cooker. That’s all there is to it! Keeping the cast iron cookware firmly in one place will avoid any unwanted scratches during the cooking process.

Use paper towels: You may use a paper towel or piece of paper to separate the cast iron pan from the cooktop to avoid scratching.

Isn’t it dangerous? It won’t. Induction cooking is unique in that all of the heat is generated within the cast iron pan, not on the stovetop. During the cooking process, the stovetop does not become hot.

A paper towel will not prevent the magnetic pull from being drawn to the cast iron, but it will serve as a barrier between the conducting metal and the glass, reducing the possibility of any scratches. Keep an eye on the cooktop while things are cooking to be extra cautious!

Smooth the bottom of the cast iron: One of the drawbacks of cast iron is that it isn’t ever totally smooth. It’s strong, efficient, and robust, but cast iron isn’t elegant or smooth. Cast iron cookware can have bumps or grooves on it.

If the bumps or grooves are on the bottom of the pans, they might quickly scratch an induction cooktop and disrupt the induction process. It does take some effort, but you may smooth down the cast iron’s bottom to eliminate any visible bumps or rough sections that might cause damage when cooking.

Enamel-coated cast iron is just as conductive as regular cast iron. However, the enamel coating on the pan might slow down how quickly the pan heats up. This type of pan is ideal for low-temperature cooking. You won’t get the same high temperatures with this type of cookware as you would with the regular cast iron cookware.

If you are cooking on an induction cooktop, the enamel cast iron/ Non-stick cookware might be a good choice because it is more protected, has a light composition, and is smoother.

And What attracts most people to enamel cookware is its non-stick properties, making it easier not to burn food onto the inside of the pan.

Keep everything clean: It’s important to keep your cast iron cookware and glass induction stove clean. Food or cooking waste that has stuck to the bottom of the pan or the glass top may cause scratches when you use cast iron again, so keep surfaces clean and free of debris.

Before you cook, it’s a good idea to clean the cooking surface with a wet towel (as we previously suggested, while you cook, leave the wet towel under the pan). A quick wipe down is also recommended for your cast iron pan.

After you finish cooking, you should clean your cooking surface. You will need to do a deeper clean once a week.

What pans do not work with induction? & How to tell if your cookware is induction compatible? For a pan to work with induction, it must be magnetized. The best way to check this is to hold a magnet to the bottom of your pan and see if it sticks. Usually, glass, aluminum, and copper pans don’t work on an induction stove unless they have magnetic material.

Beware of It Scratching the Surface: Because of the grittier and rougher texture of cast iron, you must be aware that it may scrape the top of your cooktop when placed on an induction burner. A few people today lay down a paper towel or parchment paper to protect the cooktop from being scratched by the cast iron.

Cast iron skillets can be used on induction cooktops, but their rough and porous bottom can scratch the glass-ceramic cooking surface. There is no real solution, but there are two workarounds: One is to be more careful when cooking with cast iron in general and avoid moving the skillet around as you stir the food in it.

There are two ways to prevent your skillet from scratching your stove. The first is to use a scratch protector mat. This only works on low to medium heat, so it’s best for Dutch ovens, too. The other way is to be careful when you’re cooking and not use too much heat.

Hope you got the answer of your question in this blog: ” Does cast iron work on induction cooktop or not?” If you’ve still any confusion in mind you can read these frequently asked question hope it might

What Cookware Can You Use on Induction Cooktops?

To use induction cookware, it must be made of a magnetic-based material like cast iron or stainless steel. Fully clad cookware brands like All-Clad, Demeyere, Hammer Stahl, Hestan Nanobond, Le Creuset and Zwilling work on induction cooktops because they are magnetic.

Can I use normal cookware on induction cooktop?

What Cannot be used on induction cooktop?

There are many types of cookware that cannot be used on induction. This includes aluminium or aluminium clad, copper or copper-clad, aluminium foil, glass/ceramic and some stainless steel products.

How do I know if my pans are induction compatible?

What happens if you use the wrong pan on an induction hob?

Induction cooking heats the pan directly, rather than the hob. If you have a pan with a magnetized base, it will heat up. The hob will stay cool, only the pan will be hot. Non-magnetic pans won’t get hot.

Casting is a manufacturing process in which a liquid material is poured into a mould to create the desired shape.

What is the differences between cast iron and carbon steel?

Iron is the primary alloying element in cast iron, a family of metal alloys that includes carbon steels. Because of its name, some people mistakenly believe that cast iron is exclusively made up of iron. This isn’t accurate at all. Carbon steels, on the other hand, contain a greater proportion of iron than do cast iron.

How Is Cast Iron Made?

A cast iron is defined as a mostly iron alloy with over 2% carbon, which must be present in the completed alloy. Cast irons also include minor amounts of other alloys, including manganese and silicon, which are used to modify the characteristics of cast iron.