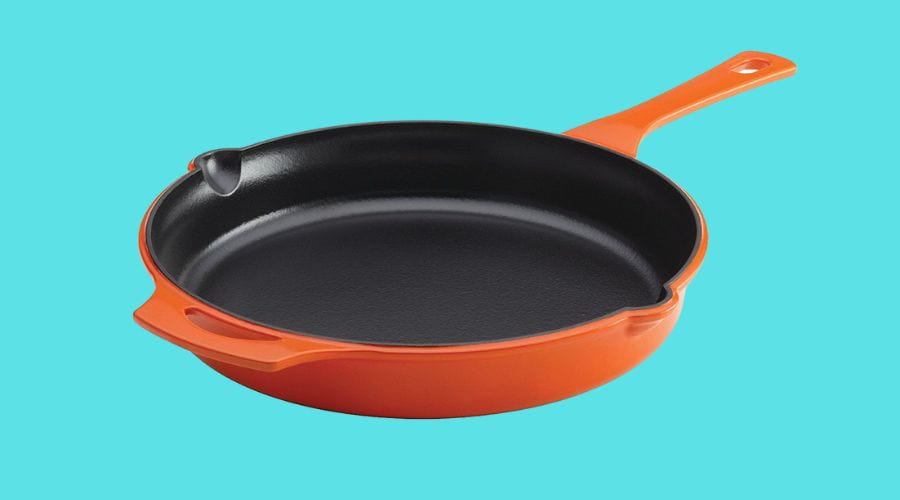 However, many people ask about whether they need to season enameled cast iron or not?.

The answer is, you don’t need to season Enameled cast iron because the porcelain coating creates a barrier between the food and the pan. However, if you want to season your enameled cast iron skillet, you can. It will help the food release easier and also give the pan a little more flavor.

Here are some of the best Enameled Cast Iron Skillets.

How to Season Enameled Cast Iron

As I said earlier, you don’t HAVE to season your enameled cast iron. But if you want to, here’s how:

1. Coat the pan with a layer of oil. You can use any type of cooking oil, but vegetable oil or olive oil work well.

4. Turn off the oven and let the pan cool down in the oven.

And that’s it! Your enameled cast iron skillet is now seasoned and ready to use.

Cast Iron vs Enameled Cast Iron: Difference & which one to choose?

Cast is one of the oldest types of cookware around. It’s heavy, durable, and can last for generations with proper care.

Enameled cast iron is a more modern invention, and it has a few advantages over traditional cast iron. First, the enamel coating makes it non-reactive, so it’s an ideal choice for cooking acidic foods. It also doesn’t require as much seasoning as regular cast iron, and it’s easier to clean.

Before going to talk about different aspects, lets first discuss similarities of both.

Both are great at heat retention and contain equal weight. They are also both oven safe and can be used on any type of stovetop, including induction cooktops.

So, what are the key differences between these two types of cookware?

Below, we’ll take a closer look at cast iron vs enameled cast iron to help you decide which is right for you.

The first difference between these two types of cookware is the surface or coating.

Cast iron has a smooth surface that can become sticky if it’s not properly seasoned. Enameled cast iron, on the other hand, has a non-stick enamel coating. This means that food won’t stick to the surface, and it’s also easier to clean.

Another key difference between these two types of cookware is the care and maintenance required.

Cast iron needs to be seasoned before use, and it should be oiled regularly to prevent rusting. Enameled cast iron doesn’t need to be seasoned, and it’s less likely to rust.

However, the enamel coating can chip if the cookware is misused or not properly cared for. It’s important to avoid using metal utensils on enameled cast iron, and it should never be placed in the dishwasher.

Finally, price is a consideration when choosing between these two types of cookware.

So, which is better – cast iron or enameled cast iron?

If you’re looking for cookware that’s easy to care for, enameled cast iron is the way to go.

If you’re willing to put in the extra effort, cast iron can last for generations.

However, it also depends on your needs and preferences. If you’re looking for cookware that’s easy to care for, enameled cast iron is a good choice. If you don’t mind putting in a bit of extra effort, cast iron can last for generations.

Here are a few things to keep in mind when using enameled cast iron:

1. Don’t use metal utensils on your cookware. Use wooden or silicone utensils instead to avoid scratching the surface.

2. Don’t place your cookware on a high heat source. Start cooking on low or medium and then increase the heat if needed.

3. Clean your cookware after each use. Avoid using harsh detergents or scouring pads, which can damage the enamel. Instead, use warm water and a soft sponge. If there are stubborn stains, you can use a gentle abrasive cleaner.

Enameled cast iron is a great option for those who want the benefits of cast iron without the hassle of seasoning and maintaining it. Keep these tips in mind to get the most out of your cookware.

Why Does Food Stick To My Enamel Cast Iron

As we already discussed, Enamel cast iron has many advantages over traditional cast iron and one of them is the non-stick feature. But sometimes food can stick to it.

The main reason behind it is not preheating the pan properly and another reason is the type of food you are cooking. Some foods like eggs, omelets and pancakes are more likely to stick to the pan.

If you want to avoid the first problem then always preheat your pan for at least 2 minutes on a medium flame and do not put any cold or frozen food in it.

Another tip is to use some oil or butter while cooking as it will help to create a non-stick layer on the surface of the pan.

I am Chef by profession, Founder & Chief Editor at CookwareSpace. I started this site in 2020 with a mission to create the ultimate resource for cookware enthusiasts.